The following are samples of work I produced during five days of working with Jo Dixon.  We started bu making backgrounds, mainly on tissue paper and tissuetex, using acrylic paints and brusho inks, using stencils and blocks and rubbing over various textues. 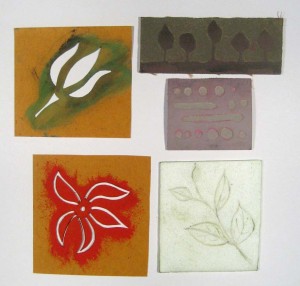 These are some of athe blocks and stencils I made.  These 2 lino blocks on the right are etched using castic soda mixed with wallpaper paste.  I love this method.  The block below uses foam that you draw into, also very successful. 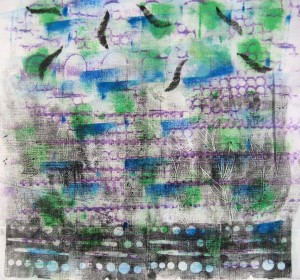 Here on a piece of callico I monoprinted with black acrylic, used printing blocks and did rubbings over textured plates with wax crayon.  The black shapes near the top were made using part of a stencil.  I’ve called this an experiment with windows and arches. 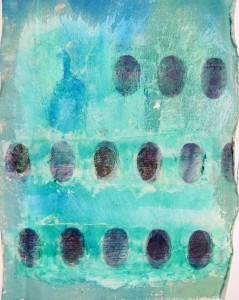 This is another experiment on the same theme.  Here I first painted on a layer of gesso, then added some modelling paste onto which I pressed the stencil of ovals while the paste was still wet.  I added paint through the stencil with bits of painted tissue in some of these.  This probably needs more doing to it, but at present I am undecided as to what. 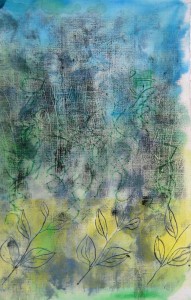 The following two pieces were originally one piece of cloth.  When I started inking in the stems at the bottom, I decided I didn’t like them so I left them partially inked on the second piece.  Before that, I painted the background with diluted paint, used string for rubbing and monoprinted. 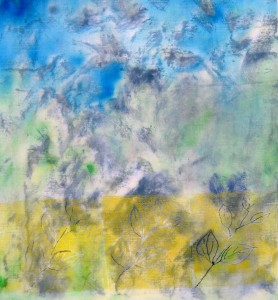 This one simply uses a painted background and a block print of the stem and leaves, partially inked. 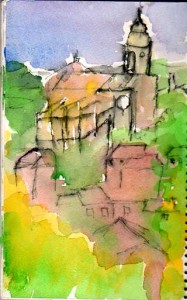 Having done a lot of experimenting over the first 3 days, it was time to think about a finished piece of work.  I had done this sketch of the the village of Bedoin in Provence in June viewed from up the hillside. 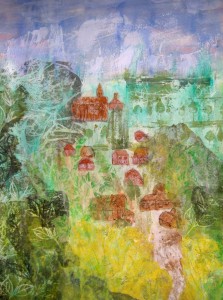 This is the finished piece.  It is done on cartridge paper, with first gesso to give the brushwork texture, then painted.  Lots of layers of torn tissue paper prepared as backgrounds earlier were glued on to give the complex effect.  The church and houses were cut out out of thin cardboard, then painted with details inked in.  Additional houses are just painted, again with detail inked in.  Some sand mixed with modelling paste was laid down for the path.  Lino prints were used for the distant trees.  I am reasonably pleased with this work, although the perspective is not quite right when compared to a photo taked from that same spot, but in essence I think it achieves the effect I wanted. 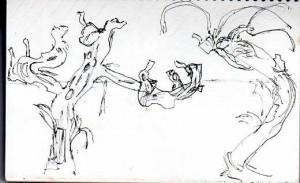 My final work was based on this sketch of old gnarled vines, again in Provence. 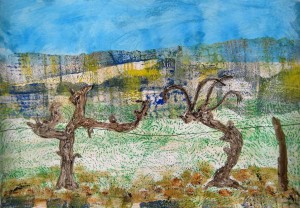 This is again done on cartridge paper, with gesso painted on first.  I then painted the sky and layered on the prepared tissue papers. The green foreground is tissue paper that had been rubbed with wax crayon over the wallpaper in  my B & B!  Everything can be put to use!  The vines were made separately on another piece of paper using moulding paste, painted when dry and cut outglueing them on in part only so that they stand pround and hopefully look more three-dimensional.  I glued a piece of thread behind them to represent the wire they had been trained on.  It was very stoney terrain so I used some pieces of card covered with textured moulding paste for these.  More paint was added once they were glued down, the darker being flicked on from the brush.  The post is a torn and painted piece of corrugated card.  I am really pleased with this work and I feel gives these old almost dead vines a creaturelike existence.