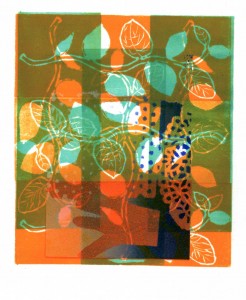 I had heard so much about West Dean and seized the chance to go there.  The course, with Dale Devereux Barker, was brilliant.  We started by using resists and stencils on the lino, which was first inked up, and then printed using a press.  My favourite effect was obtained by removing the resist or stencil and then printing a second time, so as to get a much more ethereal effect.

Below are just a few of my prints: 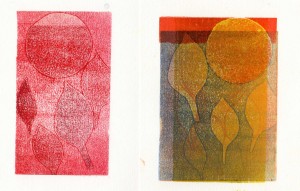 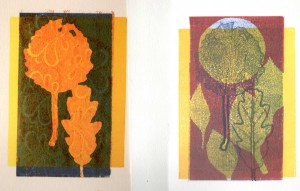 The lower two prints also made use of  actual leaves.

I then cut a block based on a curving leaf shape.  Having made a few prints from the original block, I cut away some of the leaves and over-printed. 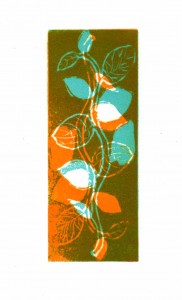 The one below also used a block made of drilled out dots and once the printing was finished, I added the cut out shapes that I had previously used as a resist.  Finally, I over-printed with a piece of sequin waste over the central section. 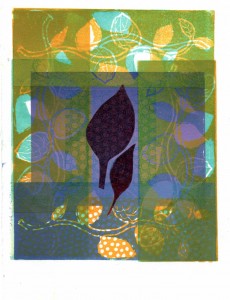 The next one utilizes a partial print donated by Dale  on to which I added my block using different coloured inks.

The next one grew and grew as I kept on over-printing.   I made another block, this time with a tulip shaped flower as well as leaves (inspired by my Turkish tiles project maybe?)  Finally, I overlaid the central motif with gold leaf to bring the piece together. 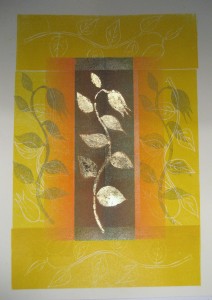 Having made the background below, I then made paper cutouts of my leaf image, inked the block, printed onto scrap paper so as to get a good layer of ink onto the cutouts which I then removed and placed them ink down  on the background.  I used silver ink.  I am reluctant to add anything more to the print as I rather like it as it is. 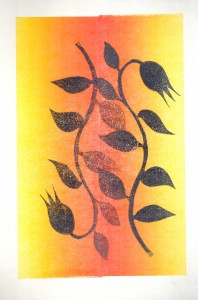 West Dean itself is the most amazing place.  It was built by the American father of Edward James who then took it on and lived there.  He was the patron of many surrealist artists so the house is full of their work, including three copies of the famous Mae West’s lips chairs, which Dali made for him.  I would love to go back in the summer to see the gardens in full growth.