I’ve been struggling to get really good leaf prints on fabric and have done a lot more reading on the web.  My latest experiments have been on cloth I soaked overnight in ash water and with leaves I have placed into a weak solution of ferrous sulphate.  This has worked well in getting good prints, but usually destroys whatever colour was in the leaves themselves. 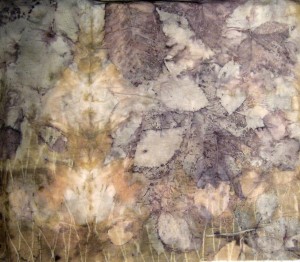 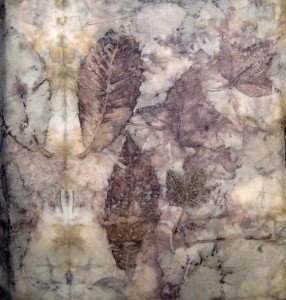 The two pieces above are different areas of the same cloth, wrapped around two copper pipes placed at the beginning of the roll and then halfway along.  The leaves are mainly from Kew gardens, edible chestnut, maple coming out really well.

The next two pieces are again part of the same cloth – this one had been previously dyed with rust.  As well as leaves there are pieces of onion skins, some flowers of anthemis tinctoria and bits of lichen. 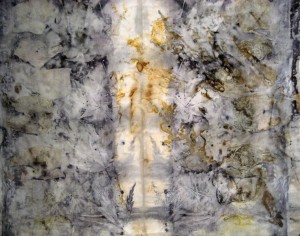 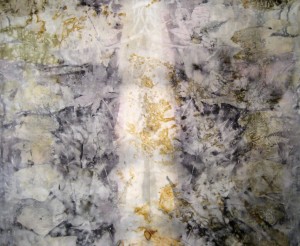 The following piece had previously been dyed with madder and is fairly thick linen sheeting.  All the following use leaves collected from Westonbirt arboretum, mainly different acers.  They were not put in an ash soak as they had been previously mordanted and not all the leaves were put in ferrous sulphate, notably the oak leaves, which have kept their colour. 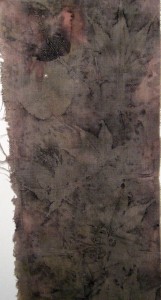 This piece had been previously dyed with onion skins, same thick sheeting. 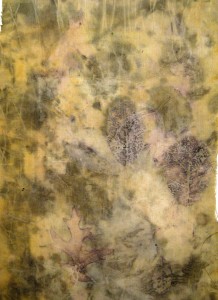 The following images are from the same piece of cloth, same sheeting.  It had been previously bundled and dyed but not successfully, so I wanted to see if I could get a better result.  There are also some flowers used – dahlias, anthemis and small tagetes with their stems. 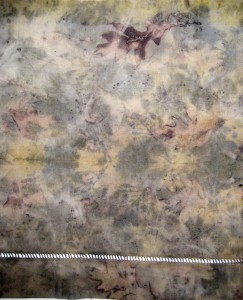 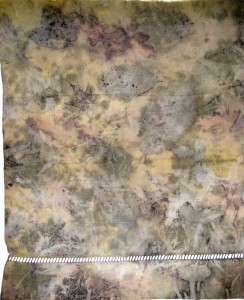 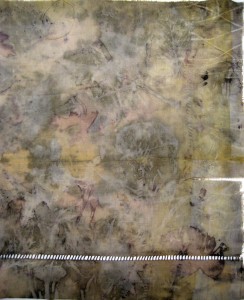 Below is a piece of silk which was wrapped around a piece of bark heavily encrusted with lichen which I found on the ground. 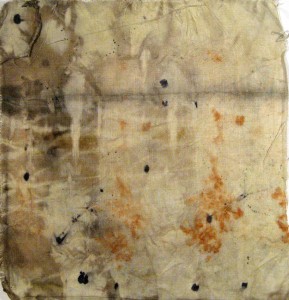 I also did some more paper prints recently, but rather than make another book, I wanted to experiment with combining them into hanging work. 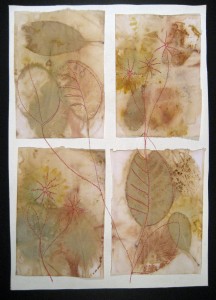 I first applied a layer of gesso onto thick canvas, laid on the prints and then finally added some stitching to bring the separate elements together .  The prints are from mainly beech and cotinus leaves, anthemis and tagetes flowers.  I think the idea works well and I have plans for a larger piece from the same print run.