The following are sketch ideas for the set of six pieces.  Due to my fractured shoulder they are somewhat limited but gave me enought to work with. 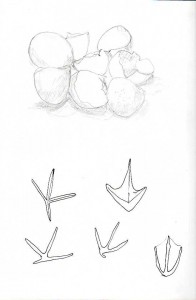 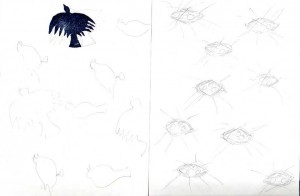 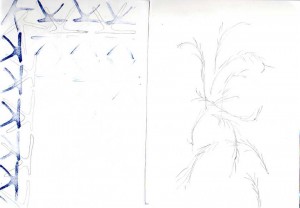 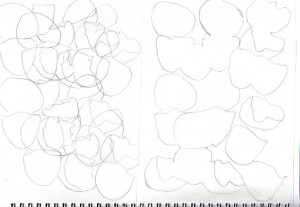 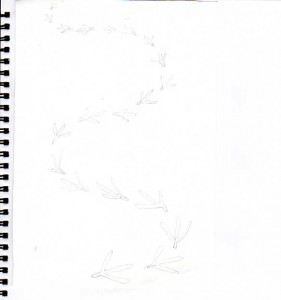 I decided on an A5 size as this would give me enough space to show the design but not be overwhelmed by the amount of stitching to do. 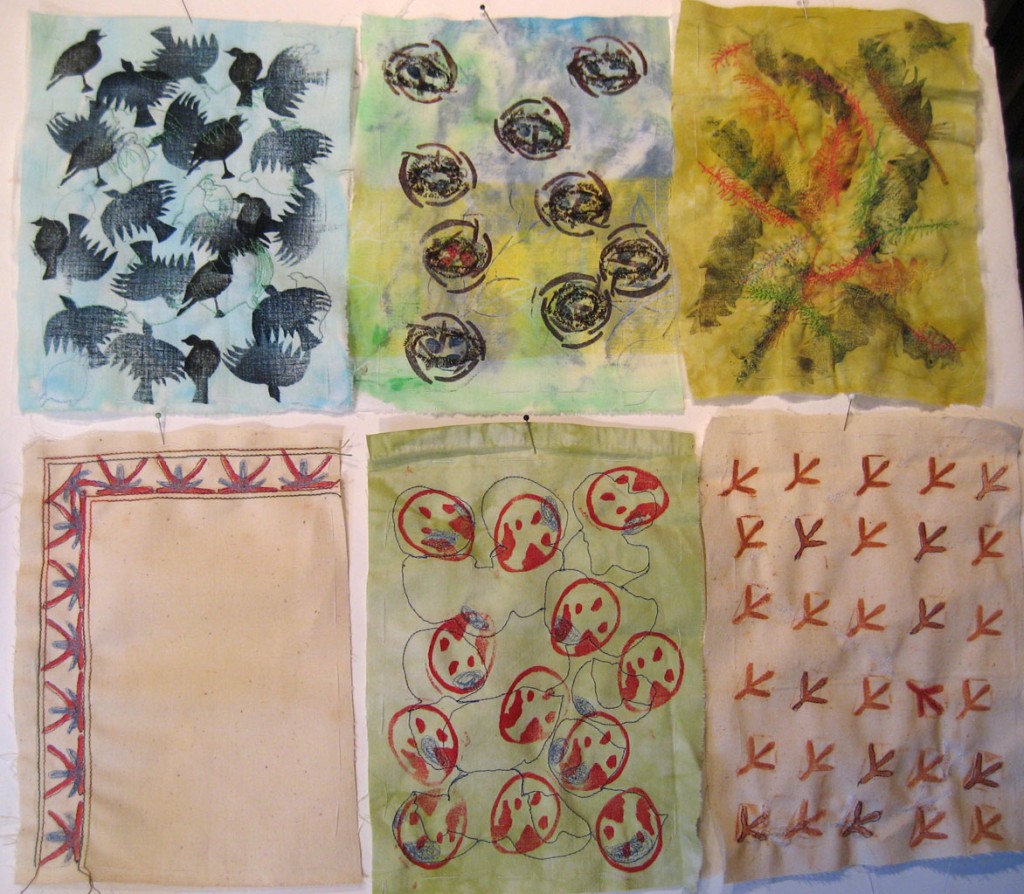 I wanted to give the feel of a flock of birds, probably crows, milling around, swooping and flying in all directions. I added extra stitching on a wing and head for the focal point. 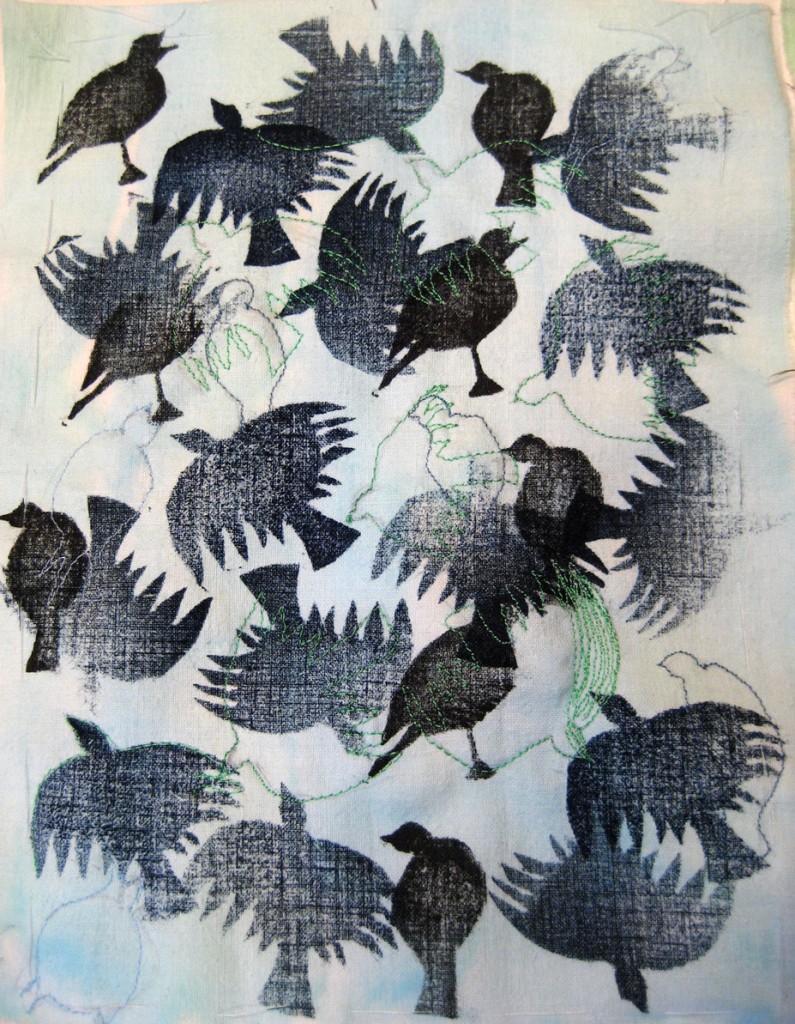 I started by using moss stitch to suggest the softness of the inner parts of the nest and made two printing blocks, one of the surrounding coarser material and one of the eggs lying inside the nest. Red stitching over one egg print makes the focal point.  The fabric is callico I found that I had previously painted and printed with leaf shapes.  I don’t think the nest shape has worked very well and I could have done more moss stitch, it has become rather lost. 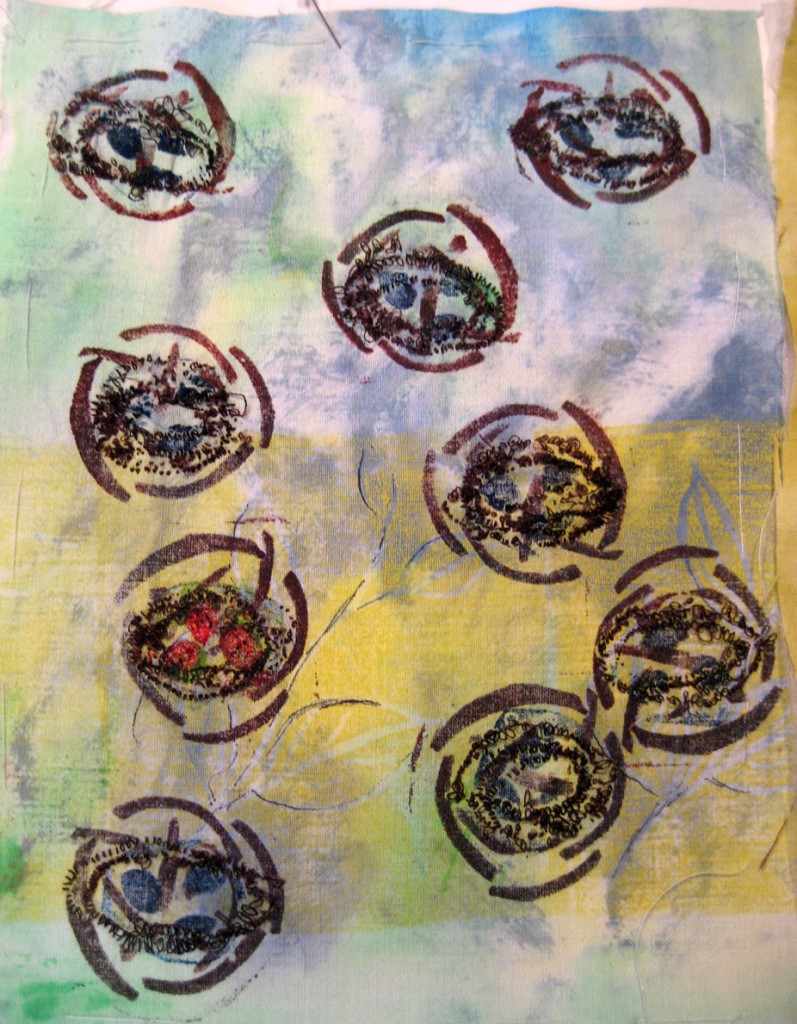 I cut out feather shapes from paper, inked and printed them. I used metallic thread bottom left as the focal point, but actually the red stitching leads you in and around more than anything else. 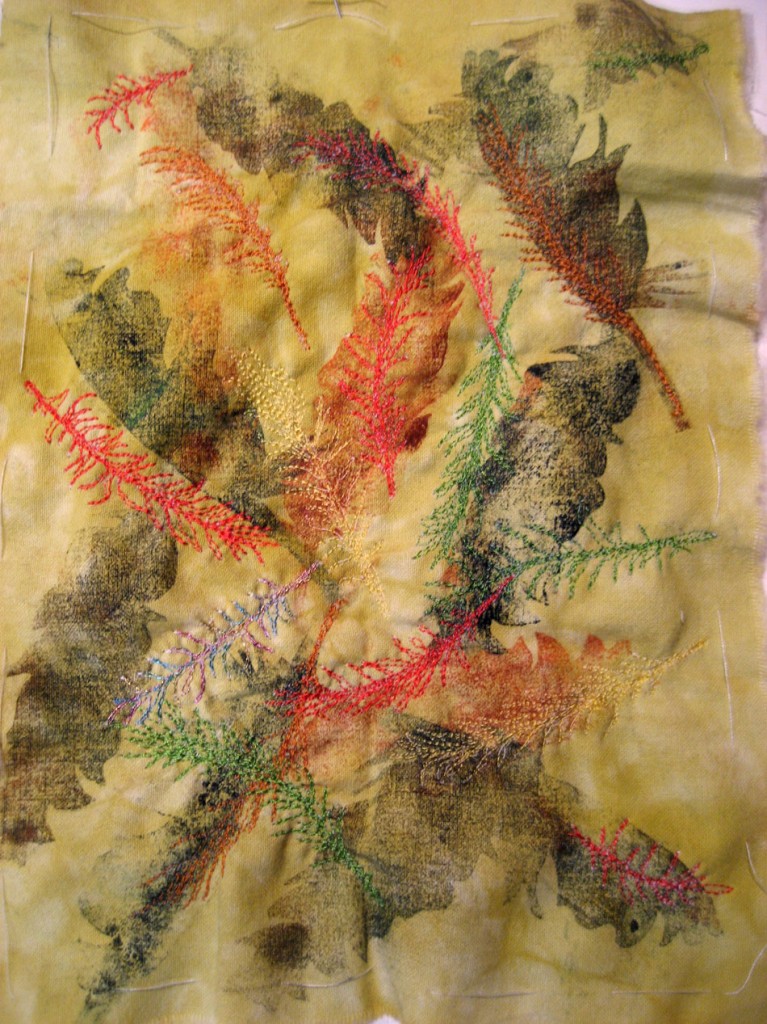 I used a bone shape which intrudes somewhat onto the stitched edging.  I could have made this border slightly wider so that the motifs sat within it.  I then added a variation of the pattern with different coloured thread. 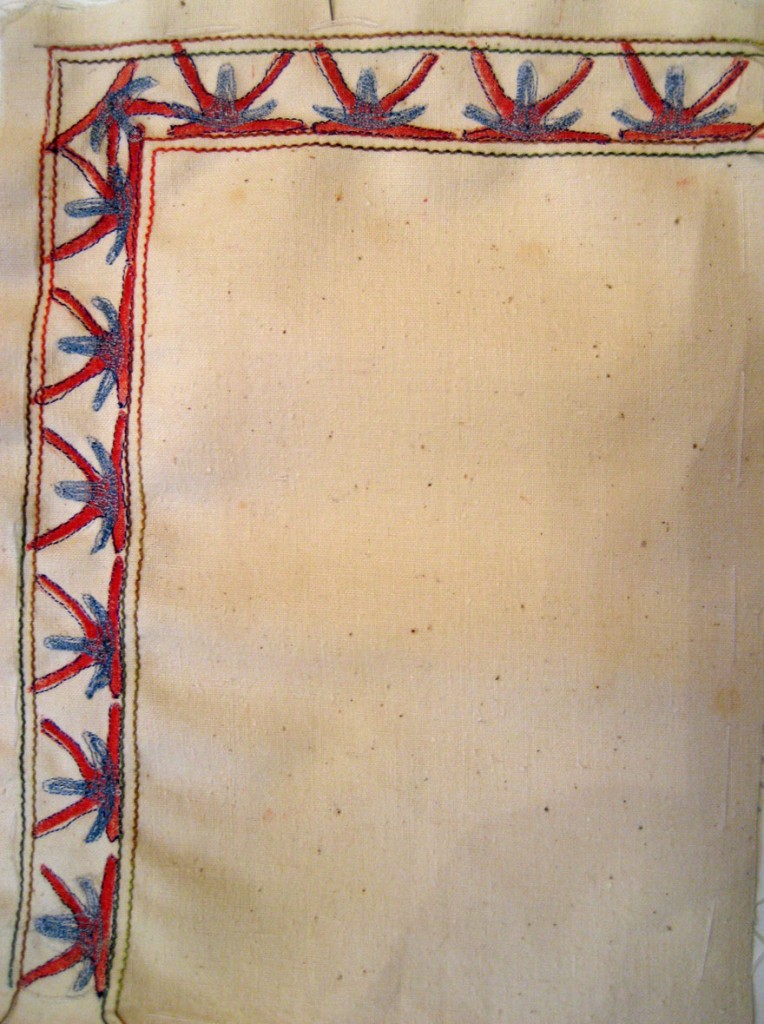 I don’t feel this has worked very well either – stitch and print don’t enhance each other as they should do.  I now realise I haven’t added a focal point either! 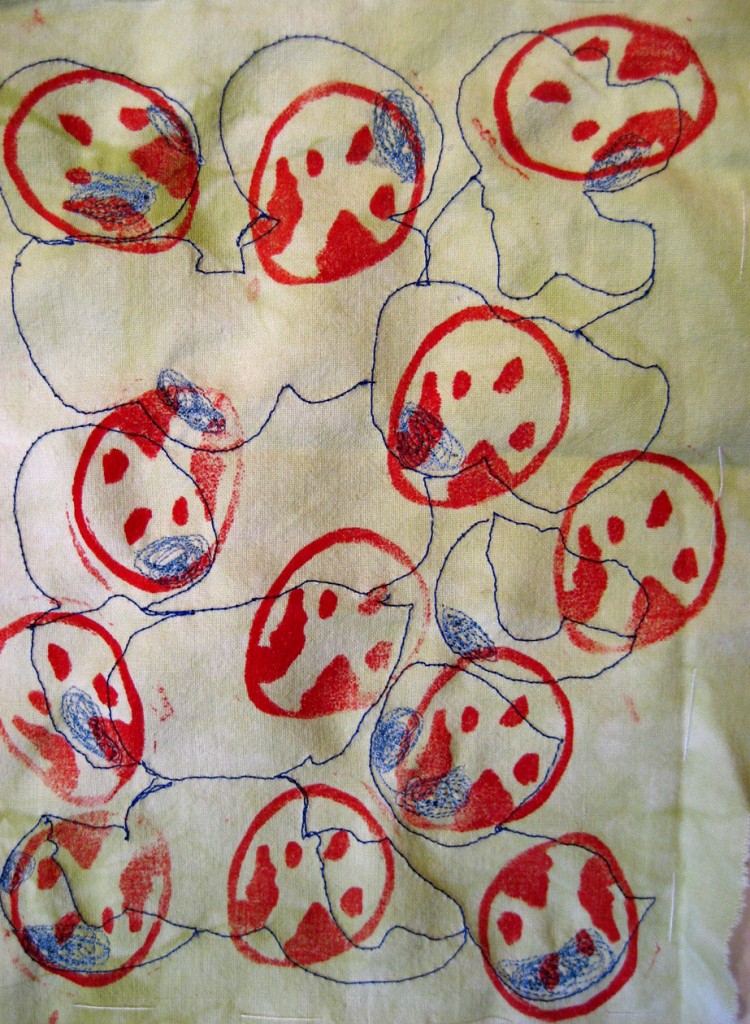 I used whip stitch for the larger stitched footprints, gradually bringing the tension back to normal as the prints get smaller, ending with just a single line of stitching at the smallest print. Focal point is a print going in the different direction in red. 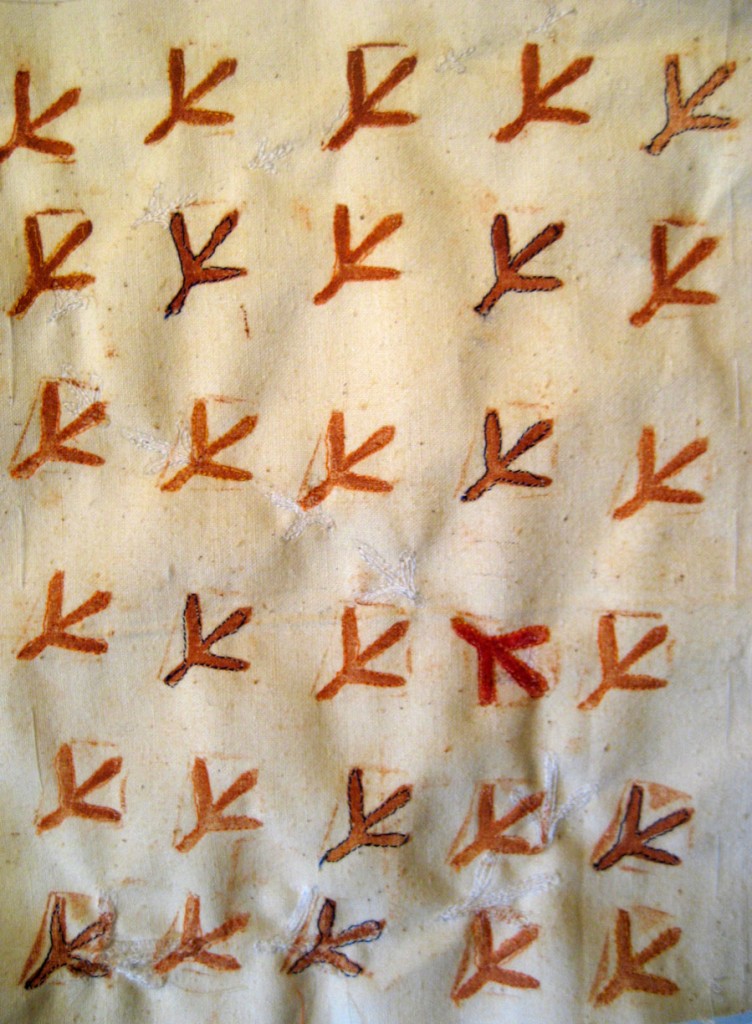 The blocks I made for printing: 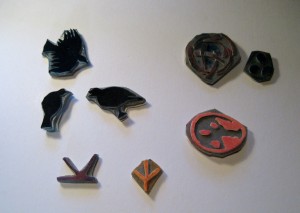 One Reply to “Chapter 2 – Birdlike patterns and textures”