I love this screen on a window looking out from the women’s quarters in Topkapi Palace and wondered how I might incorporate it into the piece.  I decided that, rather than stitch onto the piece itself, I would stitch onto soluble fabric and wash away.  The photo mockup had potential, but was maybe a bit complex.  Then, when I experimented with this, I couldn’t avoid the spider’s web effect rather than a solid round shape.  Experimenting with vanishing muslin wasn’t much better, so in the end I decided a simple grid pattern would look better – it gives the effect of looking out into the outside world of mosques, but is not so intricate that the eye is taken by the pattern rather than looking through. 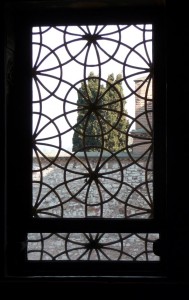 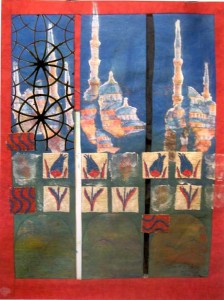 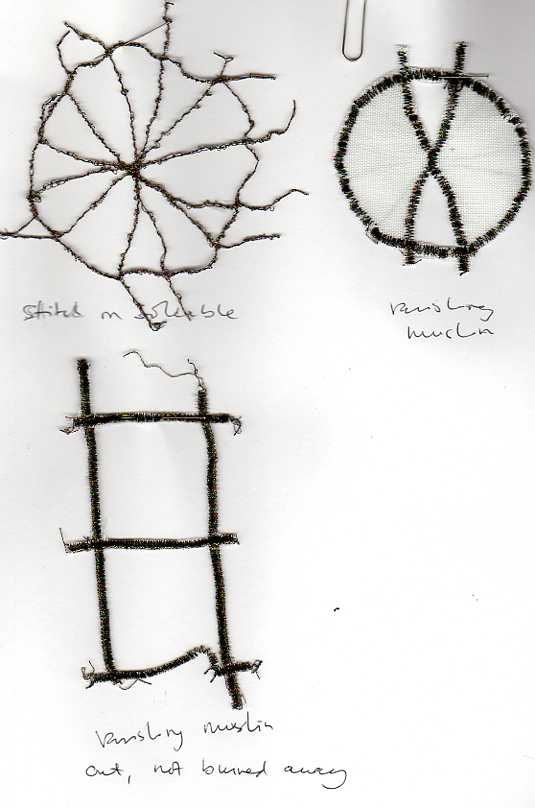 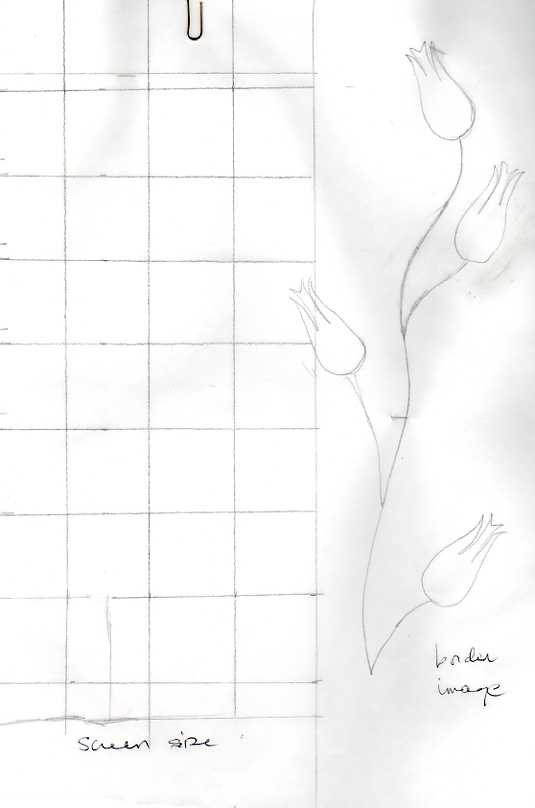 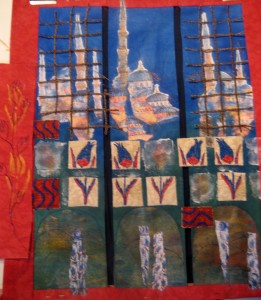 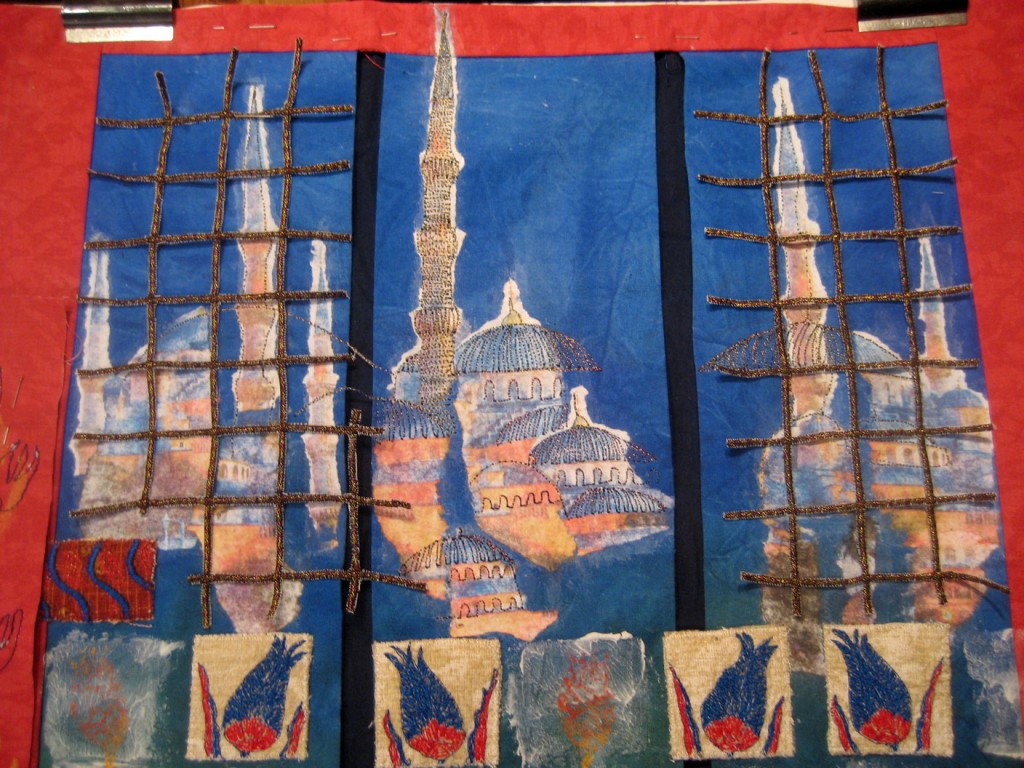 The ends of the bars will be stitched down.

I have left the central pattern open, so as to be able to see through more clearly onto the mosque shapes (reflecting today’s more secular society) where I have done a lot more stitching, though felt I needed to extend the grid slightly into it.  I think I will get rid of thetwo dome lines that cross from the left panel to the central one.  I am still not sure whether there is enough stitching,  maybe in all three panels?  Does the stitching on the sides look bitty and does it matter that there is on open area of blue in the top right corner of the central panel?

I have done some experiments on the side border design.  I like the right hand one, though the stitch on this is very rough.  The correct design will be as per the tracing above, with the gold prints done first. 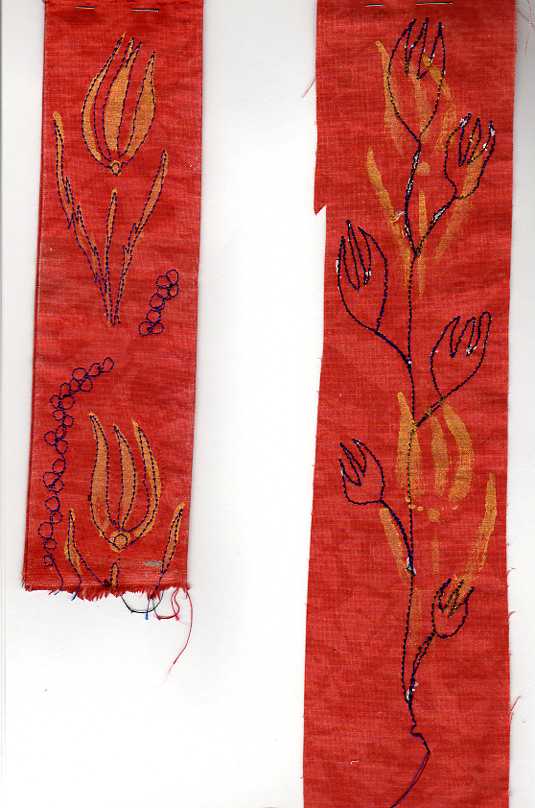 I think the top screened area and the tiles now balance each other quite well, but I am still uncertain how to proceed with the bottom part.  It obviously needs more stitching and I am still drawn to the idea of granite stitch. but I don’t want to totally cover the bondaweb colours or the shapes of the domes.

The stitching is done on the top areas! 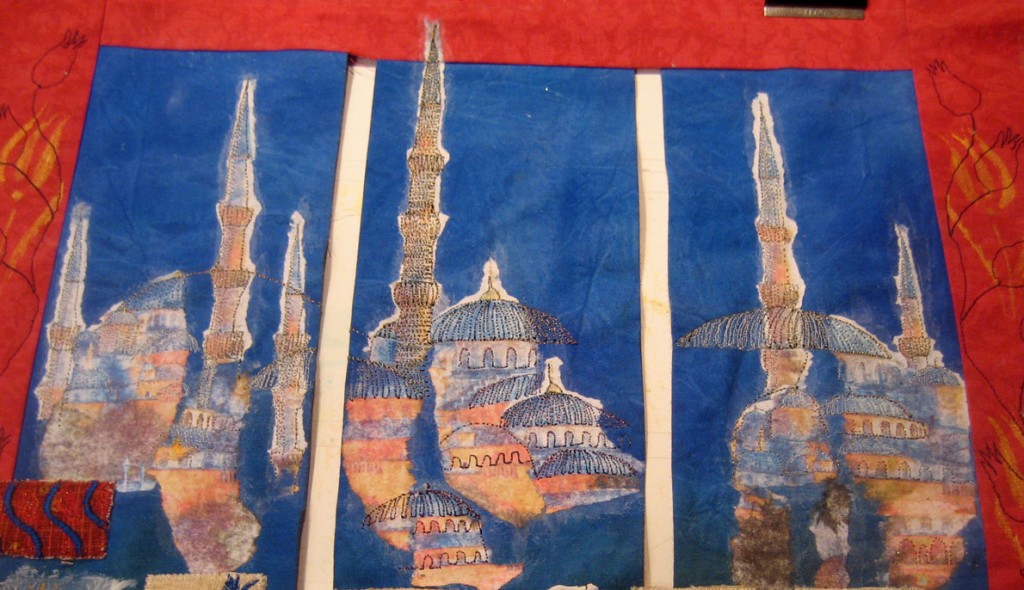 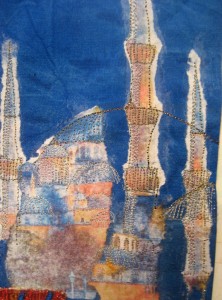 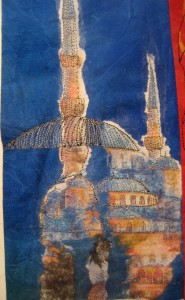 I’ve been working on the lower section.  This is a full size sketch.  I wanted the cobbles to recided into the distance so reduced their size from front to back, as well as narrowing the overall shapes.  I then felt the whole thing needed more stitching so I restitched the dome shapes with metallic thread and added roof lines in the same way as the domes in the top area.  I also added a little more colour to the some top areas of the bondaweb to reinforce the idea of horizon. 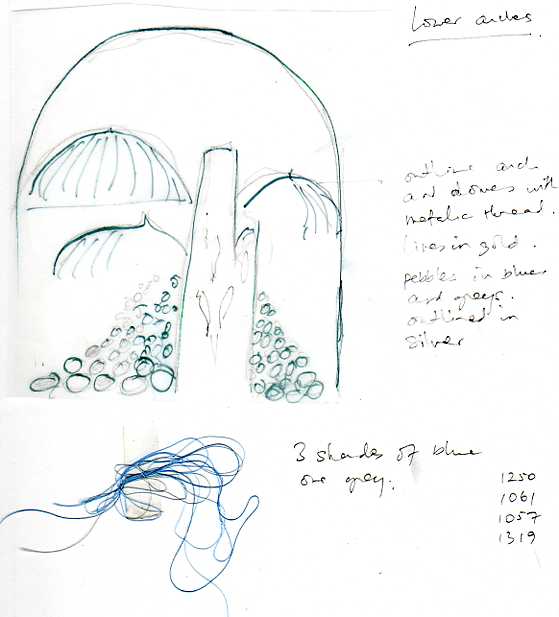 I am pleased with this border, I think the delicate stitching over the stencil prints is just right.

I found another photo of a window screen in the Topkapi Palace with curved ironwork. 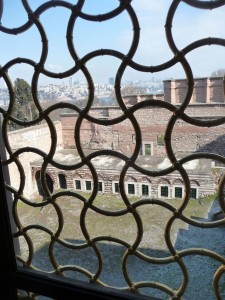 This traced design shows the effect it would have.  I can’t make up my mind which I prefer.  This one is more authentic  whereas the square grid echoes the shape of the tiles. 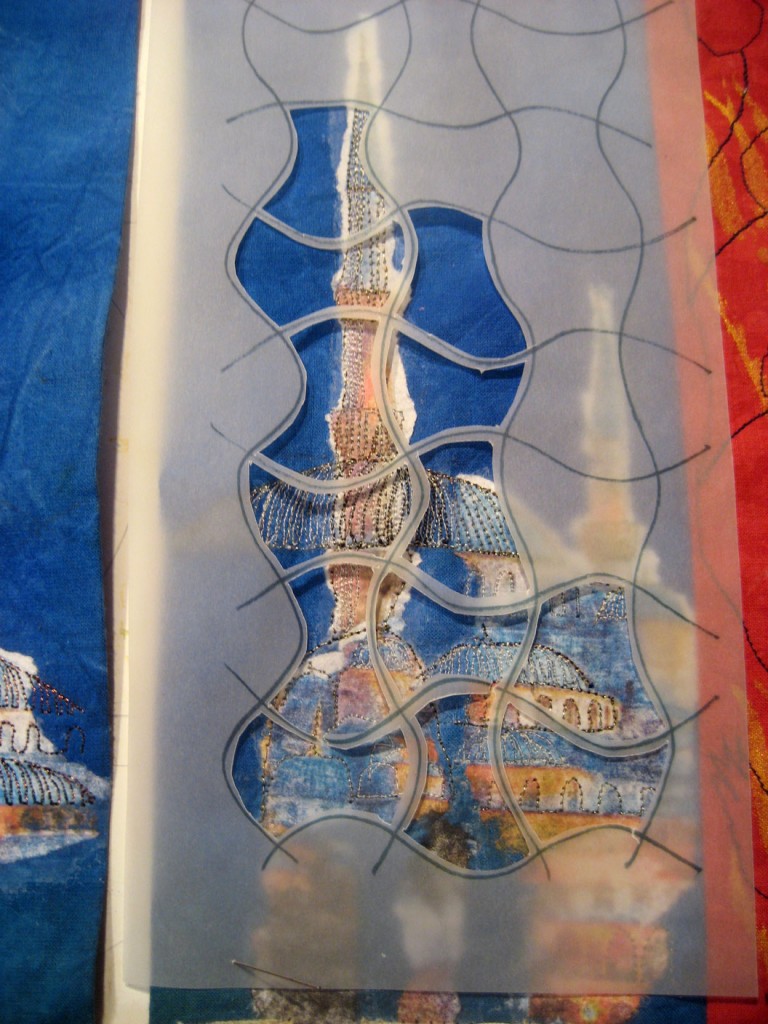 Here are the completed screens, having decided the curved shapes work much better.  I have stitched only the ends down so that the body hangs loose and looks more 3-dimensional. 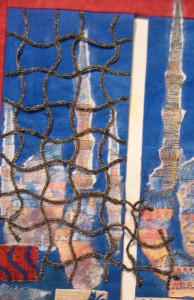 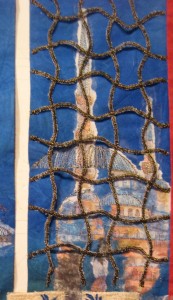 When I looked again at the images of the arches in the Palace,  you could see the blocks done in alternate colours, so I first stitched patterns onto the exisating shapes.  Then I added the appliquéd shapes so you can still see the patterns behind.

The final borders trimmed and ready to attach. I notice one of the beads has slipped slightly.  They are loose at present so i think I will add a hand stitch to secure them in place. 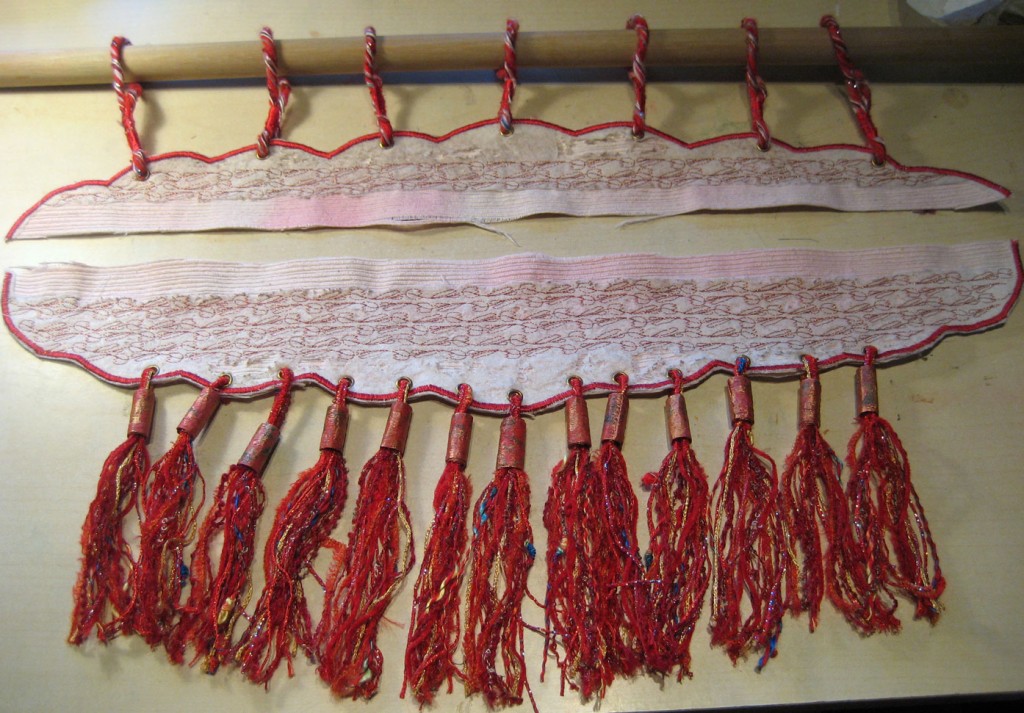 One Reply to “Assessment piece – towards the light at the end of the tunnel!”